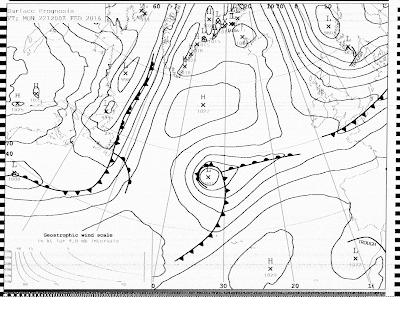 I think I'm getting the hang of this weather stuff.
Along with listening to aircraft I've been studying the skies and trying to get my head around Meteorology. There's a lot to learn. For example, what's the weather going to be like for tomorrow according to the above Wefax?
Well as far as I can tell it's going to be windy (about 15mph) and colder than today.
To help me along I got a weather station for my birthday and with that and my good old fashioned barometer I'm in the right kind of area. There's still a lot to learn and getting to know the clouds is another challenge.
This means that I need to get my skates on building that quadrahelix antenna for satellite imagery.
It's all good fun.
There will always be weather to predict.
Posted by MikiStrange at 5:24 pm No comments: 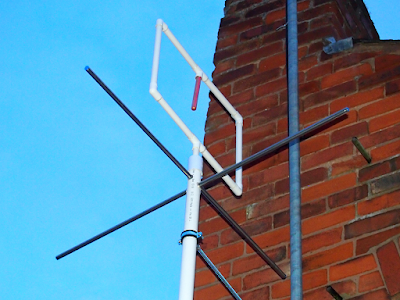 After the success of the 2m J-Pole antenna I thought I'd have a go at something a little different.

I had pretty much ignored the airband frequencies since I started listening as an SWL. But recently I became interested simply because there's always something to listen to. That and the fact that local airports give out barometric readings as well as wind information, so they're useful for weather reports.
With this in mind I decided to build an experimental antenna. The one you can see above.

It all started with a scavenged probe from work. The piece of equipment didn't function so I grabbed the probe part which came with a fine copper tube coil attached. The probe is the vertical part sticking out of the loop. Apart from that oddity it's an AM loop but roughly tuned for the airband on VHF frequencies. The whole thing is hot glued together with overflow pipe which is very cheap. I added a ground plane because the signals are coming from above.
It's mounted a bit close to the back of the house but it does work.
Yes, my experimental airband antenna works really well with lots of nice clear signals coming into my Realistic Pro-2006 scanner.
I'm going to re-program the scanner this week because as well as found frequencies I've discovered a lot more on line.

It's been another good radio weekend.
Posted by MikiStrange at 6:03 pm No comments: 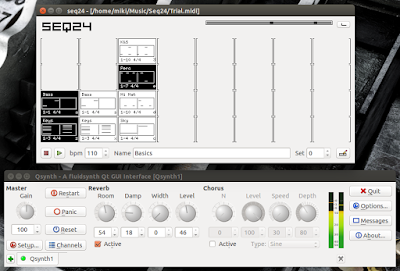 It's been a while since I wrote any music.

Last year I didn't write a single tune. Nothing. There was just no inspiration.
But inspiration is a strange thing. It can come from anywhere.
Last night I was mooching around the Linux Internet and came across an app called Seq24. It is at its heart a very simple sequencer in the mode of a loop machine. One can simply create loops and trigger them on and off. While very simple and intuitive it has a few nice tricks under the hood that makes it very accessible for either live shows or jamming a new idea. I'm using it for the latter.

There are plenty of decent getting started videos on YouTube so I'll let that be your starting point suffice to say it's very easy to get hooked and lose hours making music.
I for one am certainly inspired.
Posted by MikiStrange at 11:16 pm No comments:

Everything Starts With A D 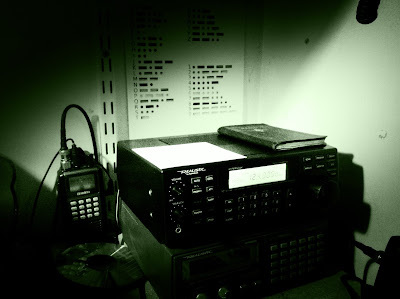 A couple of weeks ago I was asked by Documentally to create an ident for his new Backchannel newsletter.
How would I do that? Here's the story.

I was given an outline brief of Backchannel but told nothing of the actual content so I decided that the common theme in the ident should be the letter "D" to identify Documentally as the author. With that in mind what you hear in the 12 second ident is as follows:

The first sound is FM static. I like static or white noise because it covers the whole audio spectrum by itself, is a good audio filler for missing frequencies (it pads out audio well) and it gives an audible space to your imagination. Most people think of some kind of electrical device when they hear static.

The next sound is a high pitched morse code letter which is dah-di-dit (-..) and you guessed it, it's D for Documentally.

There are random notes behind these two sounds. I like the 70's idea of computers with big reels of tape producing seemingly random tones so I went for that. But in this case the tones aren't quite so random as they're all in the key of, wait for it...D!

Then the three bass notes come in. Dark and a little sinister and mimicking the dah-di-dit morse format. the notes are D C E. I got them from DoCumEntally.

Nearing the end of the ident there's a sample of an old dot matrix printer. I liked the idea of a random input at the beginning being turned into sense and a hard copy being produced ie the Backchannel newsletter.

Finally there's the power surge sound which I designed myself. It's just the thing to finish the ident. Very forceful, very final.

So there it is. quite a lot went into 12 seconds and even more into Backchannel.
Find out what it's all about here.
Posted by MikiStrange at 10:25 pm No comments: