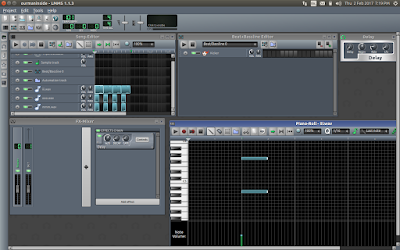 Just over a year ago Documentally suggested that I might like to make an ident for his new Backchannel newsletter. I did, it was fun.
Backchannel has now morphed into Our Man Inside! so I was once again asked to supply an ident. Something different to reflect the change. Here's the thought process:

I wanted the typewriter sample in there to represent Christian hammering away on his keyboard. The 3+3+6 rhythm spells out Our Man Inside. I used a sample of Christian's voice as a musical note to add chords but the tuning was a nightmare so while playing with various delay lines I happened on the rhythmic middle two bars. Christian spells out O M I and the echo repeats his voice in different ways which mimics the formula of the newsletter.
Christian finally says Our Man Inside! I added plenty of reverb to this to make him sound like he was inside something large. The vast space he is inside equals the vast range of subjects covered in the newsletter.
There's a secret bassline which bounces around the note C. This is my secret nod to (Sea = A boat show has been covered in Backchannel) and (See = There's always plenty to look at).
I hope you're intrigued enough to subscribe to this once a week publication.

Subscribe to Our Man Inside!
Posted by MikiStrange at 8:05 pm