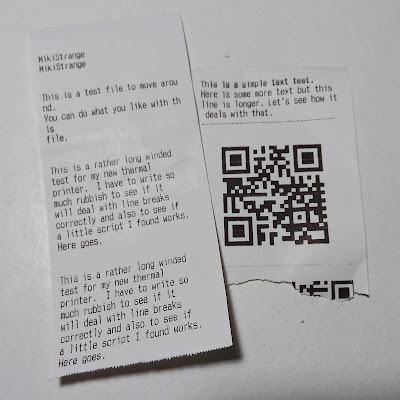 I've had a bit of a dream for a while.
I've always wanted to build a hardware random number generator.

It's easy to create random numbers on my computer but they are pseudo random and that's never quite been good enough. A while ago I saw a Raspberry Pi project that had a thermal printer as one of its components. I thought it was a good idea to get a print out of the numbers without having to waste a whole sheet of A4. I've been testing a thermal printer tonight and as you can see it performs well.
In a few weeks when my hardware TRNG USB key arrives I'll build a desktop Raspberry Pi to attach the USB key and thermal printer to.
I'll then have my own hardware TRNG to mess about with.
Exciting times ahead.
Posted by MikiStrange at 4:42 am