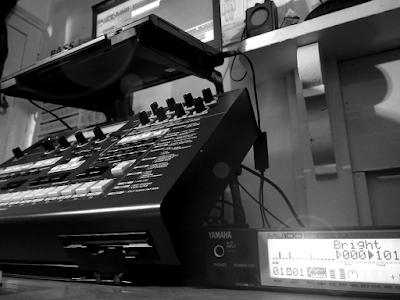 I've learned a valuable lesson.
Years ago when I started writing my own tunes I had few sound sources and I wondered where people got their sounds from. In the 80's there weren't any samplers to speak of until the Fairlight. What I thought was that electronic bands had access to a multitude of synths and that they messed around with them until they found the right sound. I have spent hours sound designing only to settle on something that was only 'near enough'.
Last week I bought the Yamaha MU100 simply because it could layer 4 sounds at once, I thought that might be interesting. It's a brilliant sound module for a whole load of other reasons, too many to list here. My Korg Liverpool similarly has the ability to layer sounds but thus far I had only dabbled in that side of it. Back to the MU100. The presets for the layered sounds are nothing short of amazing. The videos I had watched online don't do them any justice. I also started double layering tracks with the RM1x and it instantly became obvious that the years I had spent thinking that amazing sounds came from a single source were totally misinformed.
I think just about every one of the tracks I have ever released had every sound as a single source sound, regardless of how many oscillators were involved. The secret all along was to get simple sounds from various sources and layer them.
I really do feel stupid. My search for those elusive sounds is over. I know how to make them now.
It's a shame it took so long.
Posted by MikiStrange at 5:15 am