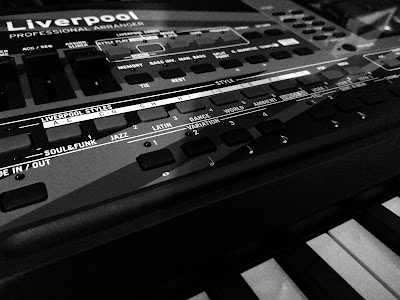 A few years ago I sold my Yamaha QY100 sequencer.
I think from the moment it was gone I regretted the sale.
The only thing that would replace it for me was a Korg MicroArranger or a Yamaha Tyros. Both are expensive arranger keyboards and I never had a spare £500+ to invest in either.
The other week I was looking into either a MicroArranger or another QY100. There was one of each on eBay, both around the £250 mark, second hand. I was late at making a decision and both were gone by the time I'd decided to bid on one of them. While looking for another MicroArranger I stumbled across the Korg Liverpool. After some investigation I discovered that it's a reworked MicroArranger stuffed with Beatles songs and a Union Flag case. It's a bit ugly but it's growing on me.
As you can see I bought one, brand new and sub £200. It's a great keyboard to play and a good accompaniment for my bass playing. I think I've only scratched the surface of its abilities and I'm really enjoying messing about with music again. It's been more than 3 years since I wrote a track.
I think that's all about to change.
Posted by MikiStrange at 7:09 am