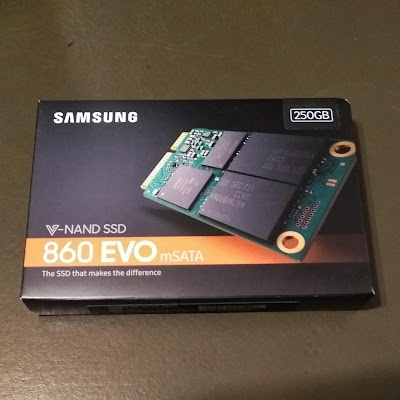 I did try and avoid posting about the TRNG but I thought I had just one more post left in the story.
The Element 14 kit for the desktop Pi has a board included so that a mSATA drive can be added. I wanted the extra drive to store the files of random numbers that I'm producing. It took a while to work things out. Adding the drive really wasn't that straight forward and I spent three hours getting everything talking to each other. I even went as far as breaking out the soldering iron and hard wiring the cooling fan into the GPIO power pins. The desktop is a bit noisy now but it'll never overheat.

While waiting for my transfer hardware to arrive I'm re-purposing the Pi Top as a processing machine. As I type this it's downloading the full Kali ARM OS.
So that's about it really. I'm just about set up for some serious encryption experimentation, that and restarting my Python encryption course along with a decent pen testing introduction.

I imagine the next few posts will be music related. Hopefully next week's blog will contain some exciting keyboard news.
Until then it's back to the bass.
Posted by MikiStrange at 4:10 am