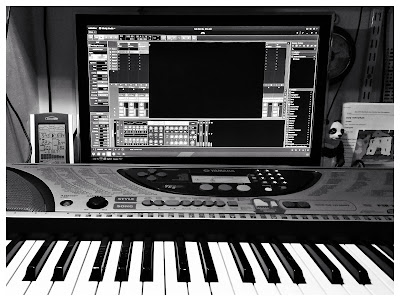 It's been a hectic week.
I've been off work since Tuesday because my car needed an MOT and I didn't know how much work needed doing. I decided that not going back to work until next week was a good idea because I had plenty of other things I wanted to do.
The first job was getting Bitwig Studio up and running. That worked fine until I tried to boot my new PC on Wednesday and nothing happened. It took me most of Wednesday night / Thursday morning to get the PC to work. What I think happened was that one of the dependencies I added to try and get some plugins working didn't want to play with the NVidia drivers and that argument borked the system.
It's all good now and I've been experimenting and writing tracks. Rather than rely on using plugins, as good as they are, I've been watching loads of YouTube videos to learn how the built in synths work. I've learned enough to design some decent sounds of my own and I'm saving presets along the way.
I've also downloaded a Soundfont creator so that I can build my own multi-sampled synths. I have plenty of synths around so that shouldn't be a problem.
Another thing I'm doing is carrying around a small field recording kit. Nothing special but enough to record sounds without it being too obvious that that is what I'm doing.
I just wish I had more free time so that I could visit places with interesting soundscapes but who knows what I can create from the mundane sounds that are part of my world.
I think I'm about to find out.
Posted by MikiStrange at 3:48 am