The Heart Of The Machine 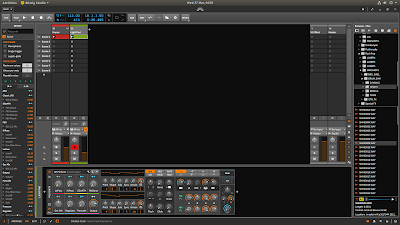 As has been mentioned on this blog many times before, when Windows went so did FL Studio.
I'd been looking for a replacement DAW for some time and quite a while ago found Bitwig Studio. Not having a decent enough computer to run it on stopped me diving into the world of Bitwig earlier. Things are different now.
Tonight I bought BWS and so far I've worked out quite a bit without reading the manual. One third of it is very similar to Ableton Live which I had used a long time ago. This is no surprise as this is where the developers came from before starting this project. The only thing I can't get to work so far is native Linux VST's but I imagine I'll work that out at some stage.
BWS is now the heart of my new studio. It'll eventually run the QY sequencers and the Korg synth. I can then pipe everything into the Zoom R8 multitrack and take the files into Audacity for mastering. That's a lot of sound options.
It'll take a while to get stuck into BWS especially with an update imminent. In the meantime I'll keep experimenting and creating like I've always done.
AmpUT is back in business.
Posted by MikiStrange at 4:22 am