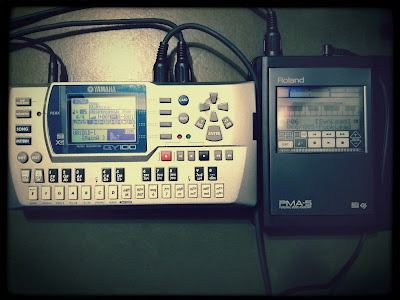 I know, I know! I have too many sequencers already.
The Yamaha QY100 is no stranger to this blog, but the Roland PMA-5 is probably going to feature just as much from now on. So why another sequencer / sound module?
The answer is quite simple. I've had Yamaha and Korg covered so far but Roland has been missing from the setup. Not any more. The little PMA-5 has the TR-808 and TR-909 drum sounds as well as some lovely samples from the TB-303 and the SH-101. Who wouldn't want some of that? Before anyone reminds me that I can download numerous soundfonts with those samples included for free I'd like to remind you that one half of my studio is purely MIDI based. I don't know of any hardware soundfont players and I still need the sounds from the units mentioned above.
The QY100 is still probably the easiest to program along with the QY300 but while the QY300 has less distractions the QY100's distractions can be very useful at times. They both have there merits.
In the picture above I've re-voiced the QY100 with the PMA-5. It makes all the difference to have some really nice sounding 808 drums driving things along. The Roland will be used purely as a sound module.
There are a couple of other units I want before I'm done but they're a bit more expensive and so I'll have to be lucky to find a bargain. They're out there.
It's just a waiting game.
Posted by MikiStrange at 4:51 am