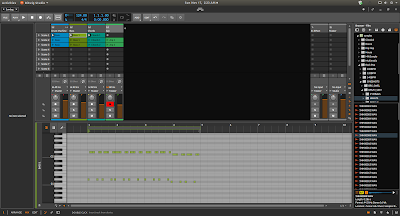 The picture above is nothing much to look at.
It's just another instance of Bitwig Studio. Tonight I decided to build a track from scratch so I started in D minor in Sundog Song Studio. I made two blocks of 4 bars and then exported the MIDI file to FL Studio to re-voice. It was more a jam session with FL Studio, I wanted to get an idea of the sounds I'd be using. I didn't settle on anything in particular so I didn't export any multi-samples. I did get a feel for the track though.
Next I imported the MIDI file into Bitwig and got to a stage where the 2 groups of 4 bars were in their own space and I added some basic drums. I then decided I wanted the first 4 bars of chords to be 8 bars. By the time I'd done that I'd not only moved the second chord up a semi-tone too much but I'd forgot to resize the loop to 8 bars. The resulting 4 bars sounded really good, mistakes and all so it's been kept.
My next mistake was adjusting the bass wrongly after I'd duplicated it several times. The result was my original bassline alternating with an offset version. Again it sounded good so it's staying too.
It's only the start of the track but my mistakes have given me ideas as to what I need to do to make the track more interesting.
At this stage all I can predict is that it probably won't end up in D minor for long.
Posted by MikiStrange at 2:53 am