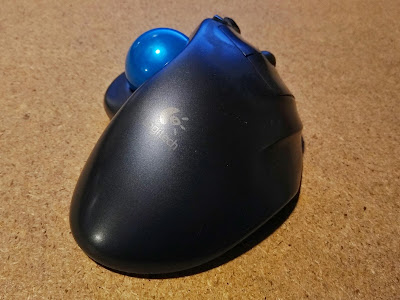 All good things come to an end.
Things like long Bank Holiday weekends and trackballs. I'm a huge fan of trackballs. There has been one on my desk for well over a decade. They're extremely accurate and you don't have to have your hand flying around knocking over coffee cups. My Logitech above is on its last legs. The occasional bump on the desk is needed to wake it up. I'll get another trackball but it'll be a wired one this time. There's a lot to be said for plugging stuff in. It just works. Unifying receivers are a bit hit and miss without the proper drivers especially on Linux. I'm surprised mine has behaved as well as it has.
The other thing that didn't work tonight was my CD ROM drive. Well, I say it didn't work but it did. It showed up in the file system but it wouldn't show the contents of any disk that was inserted. I'm trying to grab samples off old Computer Music magazine CDs. I'll try another drive at a later date.
In the meantime I had my small Sony dictation machine out today and recorded the ambient sounds of the road outside my front door. The most notable sound I sampled was of a Blackbird singing. That was loaded into a sampler in Bitwig and I granulated and then further processed it. By the time I'd finished I had something usable. I'll add it to a track in the future I imagine.
I hope you've had or are having a decent break.
For me it's back to work tomorrow, or should that be today.
Posted by MikiStrange at 3:20 am