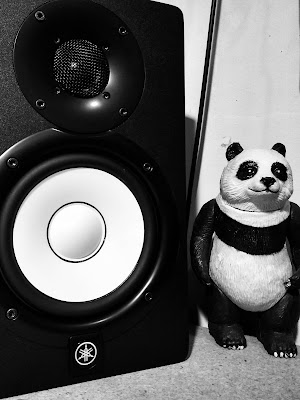 My studio is complete.
The only thing that was missing was a pair of studio reference monitors. The thing that is special about such speakers is that they are designed to produce an uncoloured result when listening to audio. They have a flat frequency response and can only be slightly adjusted to suit the environment they are placed in.
My first choice was to be the KRK Rokit RP5 G3 monitors but I was advised that despite them being good speakers the Yamaha HS5's were better. This was based on testimonies from people that owned the KRK's but that had then listened to the HS5's. I could have gone for the 8 inch cones but in my small mixing space that would be overkill.
I plugged them in, set everything to 0 and played a track from Bitwig through them. Even without having broken in the speakers it was obvious where my track mix need some work. Muddy bass and not enough high end was my first thought. I know how to adjust my mix and the mastering won't need too much work after that.
The black and white speakers are very much at home on my desk next to the similarly coloured panda.
Expect results soon.
Posted by MikiStrange at 1:14 am