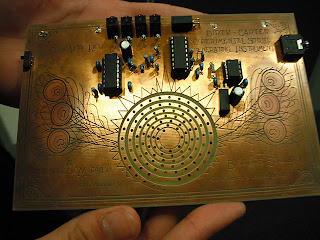 Last night I went to see Chris Carter and the Dirty Electronic Ensemble at Phoenix Square in Leicester.
It's hard to describe what I heard. There were no sing-a-long choruses or catchy riffs to bounce along to. No, this was sound in a very raw form. It was more free-form expression using an instrument no larger than a postcard, you can see one above. Each soundscape was different, if I remember correctly there were four in all. The sounds expressed included clicks, sine waves, distorted oscillated beats, drones and noise, plenty of noise.
It was amazing to think that the source for all this sound came from a small circuit board that is played using just fingers, which were often licked to get a better contact with the instrument, and by tilting the device. 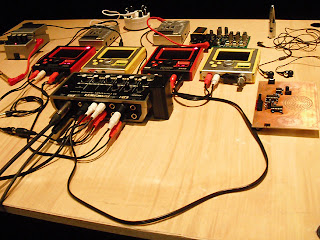 There were a few effects scattered around the stage, guitar pedals, kaos pads and things made with springs and metal and speaker cones. It was sculpture but it was helping to shape the sound in some way.
The final soundscape had all 25 of the Dirty Electronic Ensemble and Chris Carter on stage and down the sides of the auditorium each holding their Experimental Sound Generating Instrument and playing with no effects or amplification, just the small speakers that are on the ESGI's. This was probably my favourite part. I tracked the same sound across the room as pure chance had that sound on two ESGI's. New sounds came and went, some never to be repeated, perhaps ever. One by one the red lights disappeared until there were none and it was over.
It's was a fantastic experience and I'm glad to have made the effort. Members of the Dirty Electronic Ensemble were happy to show me their ESGI and I even had a go, not as easy as it looks but immense fun, wet fingers and all. 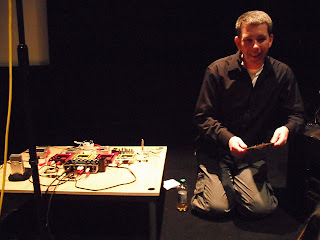 Chris Carter hung around afterwards too and kindly let me get the photo's above of his setup. I also caught up with him and John Richards in the bar afterwards and asked them about the ESGI.
Chris Carter's is the first voice you hear:

Posted by MikiStrange at 4:48 pm