Posted by MikiStrange at 9:14 pm No comments: 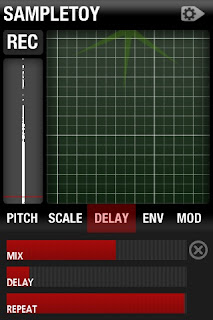 What is sound?
The honest answer is "Whatever you're capable of hearing."
So, to be able to play with sound is an adventure, one worth exploring.
I've been playing with Sampletoy. An iPhone app that lets you sample a sound and then mess with it.
I had previously been playing with Curtis Heavy but it's a pain getting the results off the iPhone and into my DAW. Sampletoy changes that. Once you've decided how to manipulate your sample, adding pitch changes, scale changes, delay and modulation you can simply record your work and email it to yourself as a .wav file. What could be simpler?
The effects are good, the controls are manageable and the results are all your own work. There are no presets here.
I have never used an app to produce content for my DAW before now, just straight audio sampling from recorder apps but this has changed the way I use my iPhone.
I'll give this 5/5 simply because I can mess to my hearts content and have the results in my DAW in no time.
Posted by MikiStrange at 9:45 pm No comments: 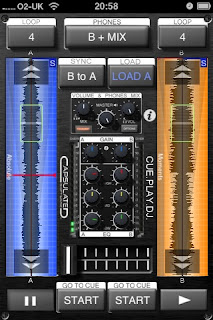 I've been playing with Cue.Play.DJ for a few days now and I have to say that I'm impressed.
There are a few DJ apps for the iPhone. I own Touch DJ which is great if you have a headphone out to a mixer, I've used it to DJ and the sound and performance are very good. I also own Sonorasaurus which while more intuitive than Touch DJ is only really good for crossfade mixes, but if that's your bag then I'd recommend it.
Cue.Play.DJ caught my attension because of its streaming abilities.
First of all there is latency, about 2secs which is bad but can't be helped especially over a Wi-Fi network. Then there is the syncing of tracks that aren't m4a. mp3's just don't cut the mustard inside Cue.Play.DJ.
This sounds like a major problem but in fact it isn't. This app seems designed for DJ's and not those hoping to be DJ's. Using the split headphone option I can still beatmatch tunes and the pitch sliders get me to the point easily. Add to that it's all done before you crossfade in the track and you're laughing.
What makes this app different is that you stream the output over Wi-Fi and your audience just gets a perfect mix. The sound quality is fantastic, all the EQ controls work perfectly and despite the lag you'll get away with making adjustments.
The Cue Play Setlist software works perfectly so adding your own tracks is a breeze and it also handles the Wi-Fi sync. It all just worked on my Vista system but XP is supported too.
Overall it's a DJ app for DJ's. If you're starting out it's going to be tough work working with the latency issue but if you're experienced you'll deal with it and make use of a proper DJ app.
I'd mark it 4/5 for now.
Posted by MikiStrange at 9:28 pm No comments:

Posted by MikiStrange at 8:47 pm No comments: 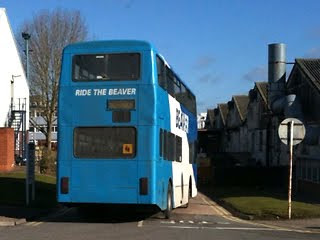 Take a close look.
This is one of a small fleet of school buses that drive around Leicestershire. I've been hoping to get a photograph of one of them for quite a while and as you can see I finally managed it.
I imagine that the 'Beaver' buses are so called because in Leicester 'Belvoir' is pronounced 'beaver'. There are a lot of 'Belvoir' places in Leicester, a street, a college, you get the idea.
It would seem that adopting the pronounced spelling would be a good name for a bus company. However the 'Ride The Beaver' slogan used by the bus company seems to be as close to a deliberate double entendre as you could possibly get. This post is sounding like I'm about to get outraged that such a slogan and school children should not be seen together, but I'm not.
It's great to see the cool kids upstairs at the back of the bus and the slogan right behind them.
I'm laughing along with everyone else.
Posted by MikiStrange at 7:03 pm No comments: