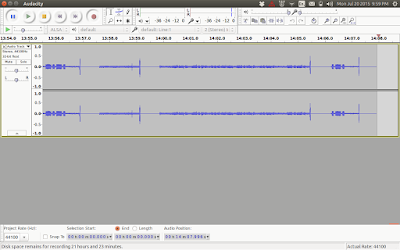 While I like listening to the soap opera that is radio life on my scanner I do have other commitments and therefore can't dedicate too much time to it.
What I needed was something to monitor the scanner and only keep the interesting bits, then when I have time I can listen to the compact version and not have to sit through the silent parts.
Step up to the plate Audacity.
I really do like this audio editor. I'll admit to missing Cool Edit Pro but Audacity is a great second and not only because it's free. Since I first used it many moons ago it has come on in leaps and bounds. With this in mind I thought I'd see if it was capable of sound activated recording. You'll be pleased to know that it is very capable of the above task. Just set your activation db level and it'll start when sound goes above that level and stop when it drops below. All very simple and all wonderfully effective.
As you can see above in the screen grab it has captured just the audio I want to listen to and none that I don't. There are probably a few more features in Audacity that I have yet to discover and I look forward to finding those.
In the meantime I have a lot of useful audio that can be repurposed another time.
I wonder what I'll produce.
Posted by MikiStrange at 10:22 pm No comments: 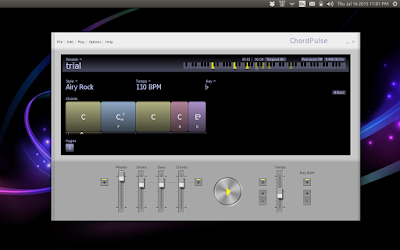 I hadn't played with ChordPulse since I switched over to Ubuntu from Windows.
I'd had one failed attempt at getting it to work on Ubuntu before but I was new to Linux and I really hadn't a clue so I gave up. This time around with a handful of knowledge and a determined approach I managed to get ChordPulse working. It's a fun program. Pick a style, a tempo and some chords and one has the perfect backing band. I've already been jamming with my baritone ukulele and I'm off to the loft as soon as to grab my Honer melodica.
While I realise now that instead of buying a radio I should have bought an arranger keyboard my despair at a lack of music making gear is diminishing fast. I have the Jack audio connection kit installed along with a few bits of music software and I'm enjoying playing after about a year in the musical wilderness.
Of course the holy grail for me is to have FL Studio running and I'll probably attempt that on my Ubuntu Studio machine.
In the meantime I have enough to keep me occupied.
Posted by MikiStrange at 7:50 pm No comments: 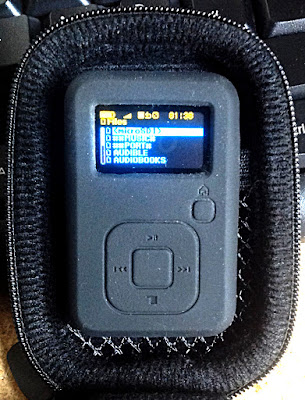 A few years ago I owned a Zoom H4 audio recorder. I spent a lot of money buying it and even though I looked after it it eventually developed a fault which couldn't be fixed and like so much modern technology it went into the bin. I didn't replace it because although the H4 is great when it worked I didn't think that a few years use was good value for money.
Since the H4 died I've been looking for a replacement. It certainly wouldn't need all the bells and whistles that I'd had before. What I require for an audio recorder is firstly that it's cheap and secondly that it's portable. I've looked at a lot of bits of gear and nothing appealed to me so I put the idea on the back burner.
Moving on a bit, I recently joined a gym and wanted an mp3 player. Like just about everyone else I wanted some distraction from doing anything physical that was out of my comfort zone, I think that's the correct parlance.
After doing a lot of research I decided on and bought a Sandisk Sansa Clip Plus. It ticks all the boxes and a few more too. It also incorporates an audio recorder. I've found a couple of recorded samples and it's perfectly OK for my needs. But as the title of this post suggests it doesn't end there. There's one big surprise to add to this tale that'll make you rethink spending big on your next mp3 player.
Whilst doing my research on the Sandisk Clip Plus I found that there is an open source alternative OS for the player called Rockbox. Not only does it add countless options to the player but it dual boots alongside the existing OS so you lose nothing and gain everything.
Even on my Ubuntu PC it's simplicity itself to install with it's GUI. It took me all of ten minutes to get it up and running. It'd take me hours to list all the extras that Rockbox adds to the Sandisk so I won't bother. Suffice to say that a trip to rockbox.org will give you all the details. You may have an old mp3 player that's in their list of supported devices.
I suppose I should finish by telling you what it sounds like, after all I'm talking about an mp3 player here. My evaluation for what it's worth is that it sounds as good as any mp3 player I've ever owned. In fact it sounds better not least because I can tweak the audio settings to my liking and not have to rely on naff presets which are never quite right. It's also loud if that's how you like your audio with no restrictions on volume up to 24db.
Personally I'm very happy with my Sandisk Clip Plus and the Rockbox OS and I've finally got my replacement audio recorder.
Posted by MikiStrange at 2:09 pm No comments: