Happy As The Proverbial Pig 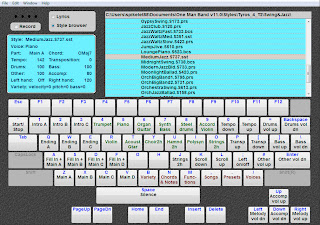 It's one of those things you admit to when you're about 60 odd years old. It's OK to admit it then because you're way past being cool and you probably couldn't care less what anyone thinks of your musical tastes when you're that age anyway.
For those of you that aren't familiar with arranger keyboards they're piano keyboards with 'Styles' built in. The styles can be almost any type from 'Easy Jazz' to 'Bossanova' to 'Pops' or 'Dance', anything really. The way they work is that you can pick a style and the keyboards plays it while you add the chords and a melody on top. You really don't have to be able to play all that well, the keyboard does most of the work.
The thing is, that the sound is, well, fake. Even with the most modern keyboards there's no getting away from the fact that is just not right. The timing is too good and everything is just a little too polished. You can instinctively tell that it's not a band playing, it's just a little too automated and that is one of the many reasons that I like that sound. I like polished and organised and plastic imitations of the real thing. There is a charm to it all.
It's probably in my very nature. It's the reason I prefer oven chips and beans to some fancy foodie concoction.

Having said all that these machines are complicated beasts and it is an art form all in itself to be able to get good results from them. The best players, usually the people that end up doing the demonstrations for companies like Yamaha and Korg are particularly impressive. Talking of the demonstrators, well, they're all a bit plastic too. It's like they fell out of a poor B Movie and onto a keyboard showroom floor. But I like that as well. It makes me cringe and smile all at the same time.

Anyway, as much as I love arranger keyboards I can't afford one because they're bloody expensive. So what I did was buy the One Man Band software and between that, my PC, my old Yamaha PSR-240, my Rm1x and the QY100 I now have my own arranger keyboard albeit the size of a sofa. The great thing about One Man Band is that I can grab any of the thousands of free Yamaha or Korg 'Styles' from the web, load them into the software and off I go grinning like a chimp.

It's a complete juxtaposition to my DJing and I laugh when people ask me what type of music I like. I say electronic and add "but I wouldn't play it in a set."

Have a look at this video to see what you're missing or not as the case may be.

Posted by MikiStrange at 4:25 pm No comments: 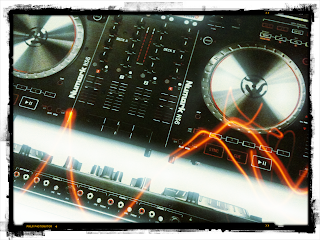 I've just played my first set on my new Numark NS6.
It was in my studio and it was a practise run for the weekend but it went well all things considered.
Early on there were a couple of audio drop-outs but I think that was because I was pushing my laptop a bit to hard. I've had to learn to moderate my use of effects but in all honesty I don't really need them. One high pass filter and one low are all I really need for cross-overs. The looping is great considering I haven't added Beat Grids to very many of my tracks. The Serato Itch software is pretty darn good when it comes to beat detection. I have two other bits of software, Deckadance and Mixxx and I'll give those a try in the future but because the NS6 and Serato Itch work so well together it seemed pointless starting anywhere else but there.

I'm going to have another run through tomorrow to try and iron out a few of my newbie mistakes but it has to be said, this software and hardware combination really makes you sound good if you're a seasoned DJ like myself. That and a bucket load of new music to play and the weekend is looking like a whole heap of fun.
I won't be the DJ I want to be just yet as I think a laptop upgrade is called for but I can get very close with the hardware I have. It'll see me through for a good while yet and with that upgrade it'll just be the icing on the cake.

For now it's slow and steady.
It's evolution rather than revolution.
Posted by MikiStrange at 9:51 pm No comments: