It began in London.
A friends birthday, well planned, well executed apart from one minor detail. Not the music itself, no, that was fine. It was just the way it was presented. Not good, no style, I thought, I can do better.
Indeed I can and have done better. A better set, a better constructed set.
My past was something to celebrate, not ignore. I'm the first in line that advocates that if you're good at something, shout about it. No-one is going to do it for you.
Since that time I've been thinking that maybe I should engage again. Feel the pulse, capture the imagination and the mood. The feeling was and is hard to escape. But why run? Why not engage?
So the decision has been made. I will return to the wheels of steel, albeit that they are now made of durable plastic.
I will DJ again. I shall teach the young bucks a thing or two about crowd control, about telling a story, about creating a beginning, a middle, an end.
I'm good at this 'musical soundtrack' stuff.
It's time I proved a point.
It's time to play.
Posted by MikiStrange at 3:17 pm 1 comment:

I'm getting an early night tonight.
Tomorrow night I'll be propping up the free bar provided by work. Work do's should be avoided at all costs after attending your first. I'm going because I'm going to change the way I spend my weekends and who knows when I'll next get a free bar at a weekend. It could be years away. I'm going dressed for the occasion, you know, make an impact. I'll supply a picture as and when.
In the meantime I need to sleep.
Until tomorrow.
Posted by MikiStrange at 10:36 pm No comments:

This is the life.
Up early for a cafe breakfast and then wondering around drinking coffee and browsing in bookshops. The weather has stayed the right side of dull so my second hand purchases have stayed dry.
This is my second flaneur's day out this year and I think I've got the hang of all this loafing and browsing. It makes a nice change to slow the pace right down and look and see things that are either missed or ignored in this hyper speed world.
I'm on my first drink of the day and it is a relaxed experience with no worrying about work tomorrow. I could get used to this but then it would become ordinary and dull.
If there is one thing about this modern 24 hour world that I like it's that there are still gaps for days like today.
I'll drink to that.
Posted by MikiStrange at 1:44 pm No comments: 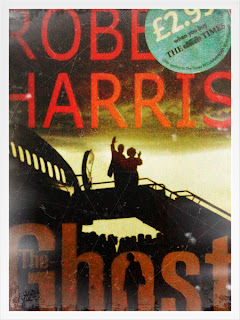 I've just finished my second Robert Harris novel.
In fact I spent most of the weekend in bed doing nothing else but read it. Over the weekend I think I've read about 300 pages. I stopped on just three occasions, two showers and to eat something.
I think it's right that I shout heap praise on "The Ghost" and Robert Harris as an author. I thought "Fatherland" was brilliant but "The Ghost" was even better. I like Robert Harris' writing style, the plots never get tired and just when you think you have an idea of what's going on something happens to make you rethink.
Having read two books I now have a third "Archangel" in my shoulder bag that I'll start soon.
It's been a very long time since I've found an author that I'm addicted to. I think the last was Isaac Asimov and before that George Orwell. I might well go back to George Orwell after "Archangel" and before I start Robert Harris' Rome trilogy.
I have a lot of reading ahead and I'm really looking forward to it all.
Posted by MikiStrange at 2:21 pm No comments:

You Are What You Eat

I'm a good cook.
For other people.
I can make my GF beautiful fresh healthy food but I'll be happy with beans on toast. Not only that but cheapo beans and bread buttered to whithin an inch of its life.
Why? Because I'm happy making other people happy and I'm happy making me happy and they are two very different things.
I may die first but I'll die happy.
Posted by MikiStrange at 9:55 pm No comments:

Back In The Saddle

Having had the run around from Orange I have had to retrieve my iPhone.
The SE has gone to a good home and I'm back online and as you can see blogging again.
It's good to be back.
Posted by MikiStrange at 8:52 pm 1 comment:

I have had the worst customer service ever from Orange Mobile.
The seriously have to rank in my all time top three worst customer service ever. They have manage to rip me off to the tune of £10. Their website is so poor that new customers are led to make the wrong decisions about packages and customer service promises are not kept.
I will never, ever recommend Orange to anyone and will tell everyone about the appalling service that I have received.
O2 might not have been great but they are better than Orange by a long chalk.
Posted by MikiStrange at 8:53 pm No comments: