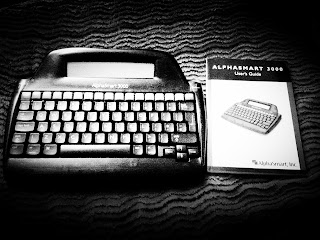 So what's this then?
This being the keyboard in the picture above is an Alphasmart 3000. It's basically a word processor that isn't attached to a PC. I know, I've got a word processor and I do love my Canon Star Writer but it has two faults, which aren't really faults. Firstly it's too nice to lug around, I really don't want it getting damaged. Secondly it's a bit of a faff getting the text files off the floppy discs because the formatting gets changed along the way. Having said that I still love and trust floppies so it may get used as an extra backup.
The reason I wanted the AlphaSmart was because it's rugged, lightweight and runs for ever on three 'AA' batteries. It's made to be rugged because these keyboards are intended to be used by among other people, special needs students, which isn't to say that all specials needs students are going to manhandle the item but some will and the manufacturers are aware of that. They are also incredibly simple to operate. Turn on, type, turn off. That's it. No boot sequence, no saving. It just works.
The beauty of the system lies in the fact that it will transfer your work to a Mac or PC by simply sending what you have written to any software that will accept text input. That's what I love about it. Work offline, send and save. Easy.

So Mr Strange. Why not just type on the netbook you intend to save the work on?
Well for one thing privacy. I can dump the output of the AlphaSmart straight into an encryption program without ever having to touch a key on the netbook keyboard so it cuts down the chance of any keylogging. Secondly if I ever had to ditch the unencrypted work on the AlphaSmart I'd be down £30 instead of £300.
Thirdly my netbook acts as a vault these days so I don't really want to be trailing it around with me. Fourthly the AlphaSmart is simple and rugged. Did I mention rugged?

So what's with all the secrecy?
Well I've been planning on writing something for a long time and the planning is done so it's time for the writing. I'm afraid the result will be dull and nerdy but someone someday will make use of it. It'll be published here in due course which is some time away yet. All I can say is that it'll be published under a CC license and it'll be my gift to the geeks.
Posted by MikiStrange at 10:33 pm 1 comment: