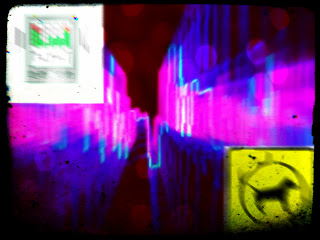 While I'm in the mood for writing I have to write this long overdue post.
For a start I'm a bit crap at making friends, I'm way too odd to just strike up a conversation because I have nothing in the line of small talk. Furthermore I shy away from approaching people I admire because I get tongue tied and end up looking even more odd. Probably like some over enthusiastic, sycophantic stalker. So I don't bother, it's easier.
The internet changes the game though. I can ease myself in with people I like and if I get no response ease myself out just as easily. No harm done.
So it has been with a couple of people I have great respect for. Both because of their knowledge on subjects close to my heart and their accessibility simply because they are wonderful human beings behind the online profile.
Firstly may I introduce Mr Ashley Elsdon. Before I knew he was Ashley Elsdon I knew him as PalmSounds. I was reading his blog for a long time before I knew he was on Twitter. Twitter gave me the opportunity to say a few words and the response I got was overwhelming. Wow! An online hero has responded to me! OK, it's not much these days to the connected generation but to me it was a revelation. This sounds like fan worship but, no! I come from a generation that contacted each other in public phone boxes and if one didn't have 2p or 10p it was all too much radio silence.
After a while I found out that PalmSounds was Ashley Elsdon and another dimension opened up. The simplest things please me, information being simple, I found I liked the man behind the profile. Still no fanboy stuff, most people irritate the hell out of me. I like the public image then find out they're a total shit. Not in Ashley's case. Breath out. Relax.
One regular contributor to the PalmSounds timeline was and is Concrete Dog. Again I tempted fate (even though fate is nonsense in my opinion) and said a few words. Again the feedback was amazing. Another intelligent, talented person with time to put up with a random like me asking dumb questions but finding the time not only to respond but explore the questions until a suitable answer had been found. Wow! Again!
I'm writing this for two reasons.
One. I'm in the mood for writing and this all needs to be said.
Two. If I find a pot of gold I'm into sharing. I can't spend the whole thing myself and I'm not selfish.
So there you go. Hopefully you'll read this and follow the links that follow.
I won't say you'd be stupid not to because by now you know that yourself.

The Art Of The Essay 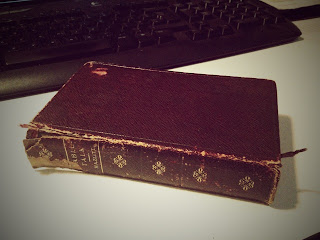 Quite by accident I bought a book that in some small way will change my life.
As you can tell from this blog I'm not much of a writer. I used to contribute a lot more to this blog but the app I was using on my iPhone became unstable and then unsupported. Nothing of any worth has replaced it.
I also checked the last time I added anything to my novel. One and a half years ago was the last time I did anything, not good.
It sounds like an awful excuse but I like to write at the oddest times and by the time I've booted a netbook I've lost the urge. My recent purchase of a portable word processor has done a lot to overcome this but as yet it isn't as portable as I'd like but that will be sorted within a week or so.
I have decided to buy a Nexus 7 when the 32gb version hits the high street next month. I'll wait a week after launch for reports then just buy one anyway.
So what has that 107 year old book got to do with anything and how did it change my life, a bit?
Well, it's by a man called William Hazlitt and what he did was to publish essays. An essay of his amounts to a decent chapter in any other book but it's on a single topic and therefore condensed. Genius.
I've looked into essays before and pamphlets as a way of publishing them. The book I now own is a collection of essays. While I may never be published by Penguin or someone like that I can use the open ePub method and get my random, condensed thoughts out there. Don't expect anything soon apart from satisfaction within myself, that and a paper I am in the process of writing. The ePub format seems perfect for getting my message across to whoever has the time to read. While I'm at it I haven't forgotten .pdf files too. They're just as good and relevant.
So thank you you Mr Hazlitt. You've given me direction and a forward thank you to Freitag and the Nexus 7 for giving me the means.
Posted by MikiStrange at 9:26 pm No comments: