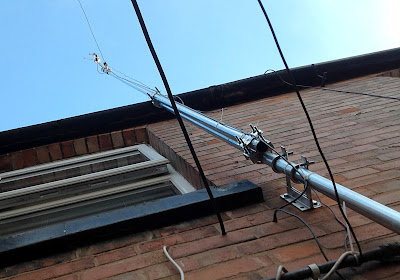 So the festive season is just about over for another year and 2016 is almost upon us.
I've been using the time off work to get my shack in some kind of order and catch up on some jobs that really needed doing.
As you can see from the picture above I've installed a new mast which supports a home made J-Pole antenna and a new long wire. The J-Pole is a bit experimental but it can hit the local 2m repeater so not a bad start. It's yet to be tested on simplex so that's the next thing on the todo list. The new long wire is higher and has a better signal to noise ratio because of the height. The old long wire is still in place but now feeds my Tecsun PL-660 so I'm happily back SWLing when I'm not playing with CW and digital modes.
I still have to re-program my Realistic scanners, once I've decided what I'm going to use each one for. The trusty Uniden UBC3500XLT is still doing the business so that's about the only thing that doesn't need touching.
So there we have it. The shack is set up for the new year and I'll be listening as must as transmitting.
All that is left to say for this year is have a very good 2016 and I'll catch you on the air.
Posted by MikiStrange at 2:55 pm No comments: 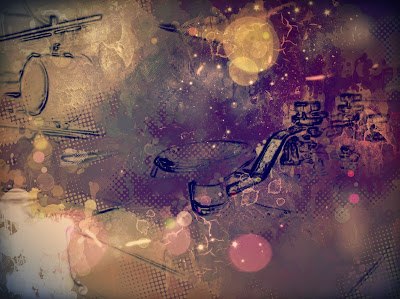 I have a wonderful teacher called Sandra who has many years of Morse experience and is wonderfully patient with a beginner like myself. Tonight we had our first QSO on 40m. It was all a bit broken for me but I got the gist of the conversation so not bad for a first go. I've been told to listen more so that's what I'm going to do. It's the only way to get up to speed.
We'll be on the air tomorrow too because practise makes perfect.

I wonder where those last three letters came from!
Posted by MikiStrange at 11:11 pm No comments: