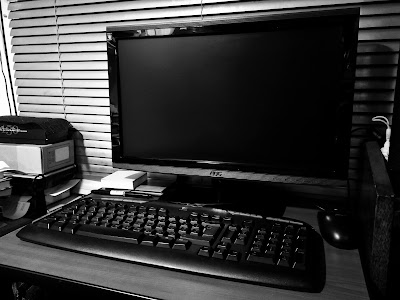 Well that put a stop to the music making.
And I'm not even bothered.

The RAM for the old (read ancient) computer turned up early so I've spent this evening / morning getting everything working. I knew the PC had had Ubuntu previously installed so I added the new 2GB RAM and powered up. I was surprised to find a fresh Ubuntu 14.04 distro waiting for me. Even with the new RAM it chugged. So much so that simple screen animations took forever. I started to doubt how good the new memory sticks were. It was no wonder that I hadn't done anything productive on it.
Fast forward through a long install of Lubuntu 18.04 including one mistake and backtrack to correct it. I had wanted to boot straight into Terminal because the PC is so old but I wasn't given the option. I didn't have high hopes for the GUI desktop when it appeared after the first boot.

How wrong I was. This modern distro flies on this old machine. More likely than not because it's an old Lenovo with an AMD Sempron chip inside. Both of these things favour Linux OS even today. I then spent a decent half hour installing the extra software I really need, Emacs, Vim, Imagemagick etc. This is still going to be a barebones PC.

So there it is, a modern, fast PC. If you have one gathering dust somewhere or you're offered one take up that offer. The RAM is cheap, the distro is free and well worth your time.
This takes recycling to a whole new level.
Posted by MikiStrange at 2:26 am No comments: 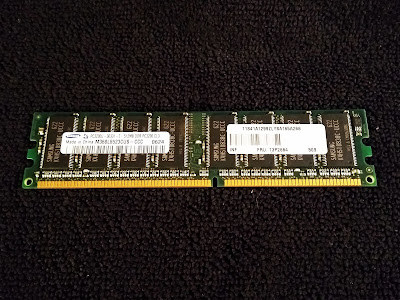 I've had a weekend of sorting out the small things that are always at the bottom of my todo list.
My list is purely mental. If I had a list of things written down somewhere I'd probably be put off starting it in the first place.

Job number one was getting my Raspberry Pi Zero W loaded with Raspbian and running a VNC server on it so that it can be controlled by my Android phone. I can now remote into the Pi desktop which is odd but very satisfying especially on a smartphone. All done and quite a simple exercise too. What should be a straight forward task usually isn't. This time was fortunately different.

Next on the list was to play my electric guitar for a while to get the strings stretched enough for it to stay in tune. New strings are better these days but there is that initial play-tune loop to go through. I had a lot of fun jamming through the Zoom R8 and trying the effects. That's all now ready for a bit of a marathon recording session which will hopefully happen next weekend. That's if I can leave my computers alone long enough.

That's going to be difficult because task three was to find some old RAM for a very old PC. A long time ago I installed Ubuntu on it so I know it works with a Linux distro. The problem was the 512MB of RAM that was trying to run everything. To give this old box its dues it managed admirably albeit slowly.
After falling for the lightweight Lubuntu last week I was tempted to install that straight away but I came to my senses and went down to the computer shop on the hunt for retro memory. The shop owner was all smiles in a 'helpful / what does this idiot want that for' way. I did try to explain that Lubuntu would handle the old PC without any problem but I think Mr Computershop is all about Windows so the word Lubuntu fell on deaf ears.
He did however suggest going onto eBay and buying my RAM there, so I did. For the princely sum of £10.95 there will be 2GB running my revived PC.
That's if I don't add more jobs to my todo list in the meantime.
Posted by MikiStrange at 3:41 am No comments:

No Win Is A Win 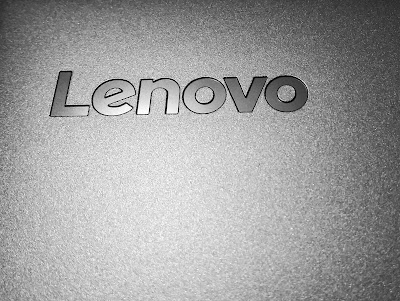 Not so long ago I bought a Lenovo Ideapad 120s because I needed some kind of machine with Windows installed.
Windows served its purpose and so the Ideapad was just kind of knocking around not doing much, which is a waste. I played with it a bit, tried a few things but I've been using Linux for so long now that I really had no use for it. The 120s is a bit like a modern netbook. It has a 32GB hard drive and Windows 10 Pro takes up pretty much all of that space. By the time I'd done a decent system clean there was only about 6GB left. I added my own 32GB micro SD card but that's still not a lot of space.
Having searched the net I found someone who had managed to install Ubuntu 18.04 and that inspired me to do something similar. My Lenovo is now running Lubuntu 18.04.
Lubuntu is a really lightweight distro and I've reversed the hard drive allocation so that I now have just over 20GB of free space on my home drive plus the 32GB micro SD. The startup time is about 30 seconds but after that it runs smoother and faster than Windows 10. Everything is familiar about the distro so I feel right at home and I now have a very productive laptop.
Linux is the ideal choice once again.
Posted by MikiStrange at 5:05 am No comments: